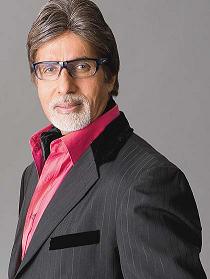 Amitabh Bachchan. The name itself conjures up a larger-than-life image, which has become immortalized with the passage of time. An anonymous dark, lanky young man who had come all the way from Allahabad with stars in his eyes, went on to be acclaimed as the actor of the Millennium in a poll with the likes of Charlie Chaplin, Sir Lawrence Olivier, and Marlon Brando in contest. Son of the well-known writer & poet Harivanshrai Bachchan, Amitabh, after completing his schooling in Nainital and graduation in Delhi, went back to Calcutta where he worked as a stage actor, radio announcer and a freight company executive in Shaw Wallace. But his growing interest in movies over the years made him come to Bombay in 1968 with an ambition to make it big in films. But success was not an overnight phenomenon. After a couple of insignificant movies like Saat Hindustani (1969) and Reshma Aur Shera (1971), he grabbed the super hit Zanjeer (1973) that was to shape his future to come. In an era of romantic films of the superstar Rajesh Khanna, his image of an Angry Young Man went down extremely well with the masses. Amitabh became a phenomenon. What followed were box office hits like Sholay, Amar Akbar Anthony, Trishul, Don and Deewar. In 1983 when Amitabh was shooting for Coolie, he was injured on an on-set accident. Millions of fans prayed for him and kept track of the news that featured daily bulletins on his health. A miraculous recovery was the mark of a second coming for Amitabh, and movies like Sharaabi, Mard, Hum followed. Though he was getting roles, none were making a significant impact. After a six-year sabbatical, Mrityudaata came to Amitabh at the age of 55. Though the movie was seen as a comeback, it bombed at the box-office and the critics wrote off this superstar, bringing his career to tatters. But the new Millennium had a new beginning. In 2000, he was chosen as the host for a new game show, Kaun Banega Crorepati. Amitabh was a suave, assured host and the show became an enormous hit. Critics finally admitted that Amitabh still had box-office magic. If the recovery after the accident during the filming of Coolie came as a second life, Kaun Banega Crorepati was a second coming as far as his career was concerned. What followed was a plethora of brand endorsements and movie offers. Amitabh was seen again in movies like Aks, Kabhi Khushi Kabhi Gham, Kaante, Boom,Dev, Armaan, Lakshya and Deewar. Bachchan again struck gold with Baghban, where he played Raj Malhotra, the loving father who sacrificed everything to nurture his four children, but was left abandoned by them in the end. But one of his most meorable performances during this period has been as Rani Mukherji’s tutor in the Sanjay Leela Bhansali film, Black. The man simply created magic with his role in the movie.

In May 2007, two of his films Cheeni Kum and the multi-starrer Shootout at Lokhandwala were released. Shootout at Lokhandwala did very well at the box office and was declared a hit in India, while Cheeni Kum picked up after a slow start and only had average success. A remake of his biggest hit, Sholay (1975), entitled Ram Gopal Varma Ki Aag, released in August of that same year and proved to be a major commercial failure in addition to its poor critical reception. The year also marked Bachchan’s first appearance in an English-language film, Rituparno Ghosh’s The Last Lear. The film premiered at the 2007 Toronto International Film Festival on 9 September 2007. He received positive reviews from critics who hailed his performance as his best ever since Black. Bachchan was slated to play a supporting role in his first international film, Shantaram, directed byMira Nair and starring Hollywood actor Johnny Depp in the lead. The film was due to begin filming in February 2008 but due to the writer’s strike, was pushed to September 2008. The film is currently “shelved” indefinitely.  Vivek Sharma’s Bhoothnath, in which he plays the title role as a ghost, was released on 9 May 2008. Sarkar Raj, the sequel of the 2005 film Sarkar, released in June 2008 and received a positive response at the box-office. Paa, which released at the end of 2009, was a highly anticipated project as it saw him playing his own son Abhishek’s Progeria-affected 13-year-old son, and it opened to favourable reviews, particularly towards Bachchan’s performance. It won him his third National Film Award for Best Actor and fifth Filmfare Best Actor Award. In 2010, he debuted in Malayalam film through ‘Kandahar’, directed by Major Ravi and co-starring Mohanlal. The film was based on the hijacking incident of the Indian Airlines Flight 814. His other releases in the year 2010 were Rann and Teen Patti. In the year 2011, he was seen in Bbuddah… Hoga Terra Baap and Prakash Jha’s Aarakshan for which he was nominated for several awards.  In the year, 2012 he was seen in Ram Gopal Varma’s Department. Bachchan has continued to host the popular quiz show, ‘Kaun Banega Crorepati’ on televison.

In 2013, the actor will also be seen making a special appearance in a Hollywood film titled The Great Gatsby. His next Hind film release will be Prakash Jha’s Satyagraha, which also stars Ajay Devgn, Arjun Rampal and Kareena Kapoor.

In 2013, he featured in Anurag Kashyap’s segment in the film, Bombay Talkies.